Isn’t it weird how one play of a song can transport you back to a specific memory?

This morning Ed and Rachel on Heart played Never Forget by Take That.

Now for my immediate family – and my sisters and their families – there is a lasting memory of this. Back in 2010 (4 weeks after I’d given birth to our 3rd child!) we all went on holiday to a campsite in France. This was to celebrate my Dad’s 65th, Mum’s 60th and their ruby wedding anniversary. It was also my youngest sister’s 10th wedding anniversary whilst we were there. Her husband had been away in the Gulf with the RAF until a few days beforehand, and so went to buy her an anniversary card whilst we were in France. He was amazed at what choice the French supermarche had for 10th anniversary cards – not realising that the French for birthday is anniversaire and they were actually birthday cards! Oh how we laughed when she opened that one!

Anyway – I digress – back to Take That.

One of the days we all trooped off to a water park (I will save you from the photos of the boys in speedos – got to love French swimwear rules!) I went on one of the big scary rides – and part way down whacked my head REALLY badly – I felt sick and almost passed out. My brother in law (he of the card purchasing amusement) had watched my descent and commented that he just thought I was doing the dance moves to Take That’s ‘Never Forget’!!! And oh how lucky that someone got a photo to evidence this…….. 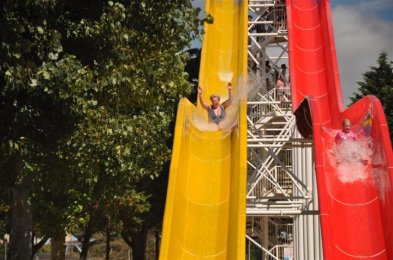 2 thoughts on “Memories: Never Forget by Take That”