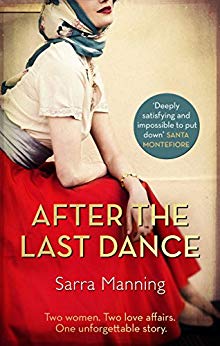 I am a sucker for a bargain – and Sarra Manning, who I know through being a Red Magazine subscriber, where she tells me what to read each month – mentioned on Twitter that this book from her back catalogue was a good deal on Kindle, so I downloaded it.

Here is the blurb:

Kings Cross station, 1943. Rose arrives in London hoping to swap the drudgery of wartime for romance, glamour and jiving with GIs at Rainbow Corner, the famous dance hall in Piccadilly Circus. As the bombs fall, Rose loses her heart to a pilot but will lose so much more before the war has done its worst.

Las Vegas, present day. A beautiful woman in a wedding dress walks into a seedy bar and asks the first man she sees to marry her. When Leo slips the ring onto Jane’s finger, he has no idea that his new wife will stop at nothing to get what she wants.

So when Jane meets Rose, now a formidable older lady, there’s no love lost between them. But with time running out, can Rose and Jane come together to make peace with the tragic secrets that have always haunted their lives?”

It sucked me in right from the start.  Initially the stories are very separate, and I was guessing how they might come together – but it’s not obvious – and there are twists and turns throughout the book.

I enjoyed the wartime setting for Rose – and thought it was very well written and really evoked the feeling of London during the Blitz.  Equally the chapters set in the present day were also great – and felt very different – as I guess they should.

The back stories for Rose – and how she got from the innocent teenager to the formidable businesswoman – and on a smaller timeline for Leo and Jane – were cleverly revealed as the book went through.

I felt the flipping from one time period to another kept a real momentum through the book and kept me wanting to read just a little bit more each night.

Overall I really enjoyed the whole book – and felt it well written and structured with excellent content – which makes me want to read other books by Sarra Manning.

One thought on “Book Review: After The Last Dance by Sarra Manning”