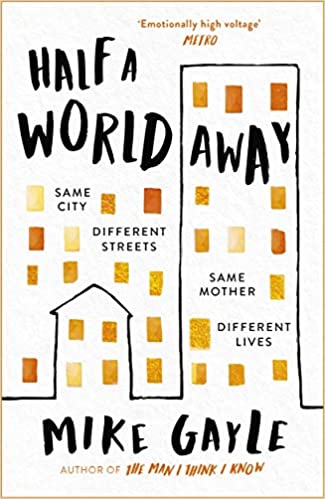 I am super lucky in that I often get to read advance review copies of books  – which is brilliant – but means I tempt my friends with reviews months before the books come out and don’t have chance to dissect books with them at the time!  Two of my book club friends – whose opinion I trust on books – raved about this, so I ACTUALLY PAID for a copy.  I think I have read other Mike Gayle books back in the day – and he’s from Birmingham (and South Birmingham at that – honestly, the accent is different, I was on a plane from Singapore to London some years ago and the stewardess asked me what I’d like to drink, I answered ‘A glass of champagne’ and she asked ‘Where in Birmingham are you from?’ – I said ‘I grew up in Kings Heath’ to which she replied ‘I’m from Harborne, I knew you were close’.)  Anyway – I totally digress – back to the book!

“Strangers living worlds apart.
Strangers with nothing in common.

But it wasn’t always that way…

Kerry Hayes is single mum, living on a tough south London estate. She provides for her son by cleaning houses she could never afford. Taken into care as a child, Kerry cannot forget her past.

Noah Martineau is a successful barrister with a beautiful wife, daughter and home in fashionable Primrose Hill. Adopted as a young child, Noah never looks back.

When Kerry contacts Noah, the sibling she lost on the day they were torn apart as children, she sets in motion a chain of events that will change both of their lives forever.

By turns funny and moving, Half a World Away is a story that will stay with you long after you read its final page.”

I enjoyed this from the start.  Kerry was a lovely character from the off – fighting for her son to have a better life than she had had. She and her younger brother had been taken into care as kids – but she’d written to her brother every year on his birthday, and every time she’d moved house, but to the adoption agency – so it was up to him whether he got in touch, she never knew where he was.

From the start you could see this was an estranged brother / sister who will find each other story – but it is sooo much more than that.

Noah was also a really likeable character – and the differences between how their lives had panned out was very evident. In fact the only person I didn’t particularly take to was Noah’s wife Rosalind – she just seemed ridiculous in her reactions to things for a large chunk of the book.  Noah had never wanted to find out about his birth family, as he was quite happy in his adopted family – and so looking for them had never been an issue for him.  I have to say his parents and adoptive siblings were all lovely and super supportive of him all of the time.

Now there is MAJOR thing that happens in the book – but I don’t want to give you any spoilers (I hate spoilers in reviews) but it is totally fundamental to the entire storyline.  It made it super emotional and I must confess to crying lots (not unusual for me!) but I think that is also testament to how emotively it is written.

Overall a fabulous read – and nice to have been able to discuss it with people now, not when they get to read it a few months after me!

I would say definitely one to pack in your suitcase this summer – but, hey ho……..

One thought on “Book Review: Half A World Away by Mike Gayle”