Last year I read the fabulous Our House by Louise Candlish which I loved – and so did loads of other people and it’s subsequently won awards!  So when I was emailed by the publisher a few weeks ago to see if I’d like an advanced review copy on Netgalley, I jumped at the chance!

“You don’t like them. They’re not like you. Are you one of Those People?
Until Darren and Jodie move in, Lowland Way is a suburban paradise. Beautiful homes. Friendly neighbours. Kids playing out in the street. But Darren and Jodie don’t follow the rules and soon disputes over loud music and parking rights escalate to threats of violence.
Then, early one Sunday, a horrific crime shocks the street. As the police go house-to-house, the residents close ranks and everyone’s story is the same: They did it.
But there’s a problem. The police don’t agree. And the door they’re knocking on next is yours. “

The story is set on a suburban London street – it is so terribly middle class – with ‘play out Sunday’ organised by some of the parents, and some typical alpha female mothers.  I have to say it reminded me quite a lot of our village (mentioning no names).  When we moved into our house almost 14 years ago there had been upset about them being built, and we were known as one of ‘those people’ in one of ‘those houses’ for quite a while!!

Back to the book!

Some new neighbours move in – who the existing residents immediately look down their nose at – and there are issues with parking and noise and dog poo (honestly, it could be our village Facebook page…….)

But then disaster strikes (no spoilers here, although it wasn’t what I expected) and the road becomes infamous.

Each chapter is told from the perspective of a different resident of the street – and it’s interesting to see how their stories all interlink – and the relationships, publicly and behind closed doors, being revealed.

I have to say that I didn’t really take to any of the characters – but that didn’t detract from the book at all – I was really keen to find out what was going on and read through it quickly to keep the pace.

The twists and turns are great – and you’re never quite sure who you should be siding with.

I also liked the use of modern communication methods – the residents Whatsapp group (all our neighbours in ‘those houses’ have iphones, so we have an imessage group!) and the Facebook pages for the various local community groups. It just felt very true to life in 2019.

Whilst there wasn’t a final shocking sentence, as there most definitely was in Our House, the last chapter does leave you wondering what would happen next!!

I would definitely recommend this when it comes out in June. 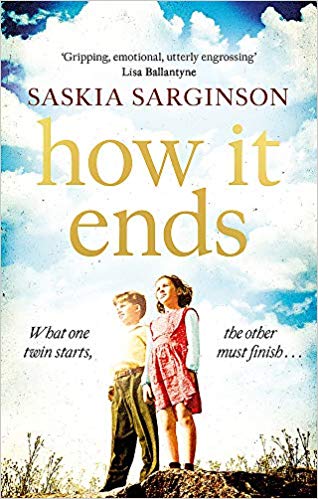 *Showing off* I was emailed by the publisher to see if I’d like to have an advanced review copy of this book, as they noticed I’d read similar on Netgalley before.  Clearly this made me feel like some sort of social media book influencer – like I should be taking arty photos of the new book with a fancy filter, and perhaps an avocado in shot – so of course I said yes.  I’ve never knowingly turned down a free book – which in some instances I probably should have – so I did at least check the blurb before I said yes this time (I’ve learned from having to read a dire book last year to ensure my Netgalley stats didn’t suffer!)

Here is the blurb:

Hedy’s journey to the truth leads her to read a manuscript that her talented twin brother had started months before he died, a story inspired by an experience in the forest surrounding the airbase perimeter. Only through deciding to finish what her brother started does Hedy begin to piece together what happened to her family.

But would she have continued if she’d known then what she knows now?

Sometimes, it’s safer not to finish what you’ve started…”

The book starts in the mid 50s (although has flashbacks to the second World War) when the Delaney family are posted to Suffolk from their current base in Iowa.  The descriptions of the different settings are excellent – and having been to military accommodation (although UK forces not US) it did all ring true.  However, I have one bug bear from the start of the book (which is possibly a bit pedantic!) but it involved white goods.  A big fuss is made about there not being a fridge in the UK house – and Ruby wants to use hers that she’s brought from the US – so a colleague arranges for a car battery to be put in the kitchen so the fridge can be powered.  This is then never referred to again – and yet a big deal of it was made initially – just seems like a bit of a white elephant reference, with the world’s never ending car battery saving the day. Then a few chapters later the family are ‘stacking the dishwasher’ after a meal.  So – the kitchen didn’t have a fridge but did have a dishwasher, in 1957 rural England.  It just didn’t sit right – and that put me on edge (which I appreciate is possibly just me overthinking and I probably should have just gone with it………..)

The first part of the book is very gentle, setting the scene – and filling in the back story of the Delaney family.  The parts about Christopher’s scoliosis are written beautifully – and how caring his Mum and twin sister Hedy are is clearly evident.

Slowly, though, things disintegrate.  I’m not going to give away any spoilers – but big stuff happens!

The second part of the book follows Hedy’s life at her Uncle’s farm – which is where her Mum, Ruby, grew up – although had been estranged from her UK family since before the twins were born.  This section was much more fast paced – both in the speed of the writing and the years that are jumped through. Again the writing really evoked the feel of a run down farm and the hard work involved in working it.  The intertwining of previous parts of the story is done really well.

There are some big themes running throughout the book – family, illness (physical and mental), sexuality, love (seemingly unrequited in some cases), responsibility, to name but a few – and these are all written really well and keep you absorbed.

The ending ties up lots of loose ends, which I always like in a book.

Moving on from my white goods issues and thus initial suspicion – I did really enjoy this book.

I’ve ended up not finishing this until after the date it was published – but at least that means you can go and order it immediately if you want to!