My eldest starting a new school means quite a lot of kicking about at the train station waiting for her to get on the train in the morning (she’s only 11, I wait until she actually heads off, I am sure, given time, I will slow at the kerb for her to jump out of a moving vehicle!)  and for her to arrive back in the afternoon – I have made VERY good use of this time by reading loads.

I was recommended ‘I Am Pilgrim’ on my Facebook page and in person by a number – and eclectic mix of friends – so I thought I would see what it was all about. 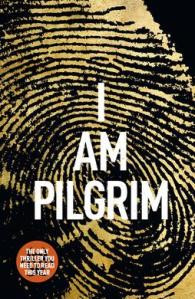 This is the publishers synopsis:

“Pilgrim is the codename for a man who doesn’t exist. The adopted son of a wealthy American family, he once headed up a secret espionage unit for US intelligence. Before he disappeared into anonymous retirement, he wrote the definitive book on forensic criminal investigation.

But that book will come back to haunt him. It will help NYPD detective Ben Bradley track him down. And it will take him to a rundown New York hotel room where the body of a woman is found facedown in a bath of acid, her features erased, her teeth missing, her fingerprints gone. It is a textbook murder – and Pilgrim wrote the book.

What begins as an unusual and challenging investigation will become a terrifying race-against-time to save America from oblivion. Pilgrim will have to make a journey from a public beheading in Mecca to a deserted ruins on the Turkish coast via a Nazi death camp in Alsace and the barren wilderness of the Hindu Kush in search of the faceless man who would commit an appalling act of mass murder in the name of his God.”

And I have to say it is BRILLIANT!!  It is very graphic – sexually at the beginning, but violently right through the book. At one point I was reading it through gritted teeth (and if I’d been watching it on TV would have covered my eyes!!) but this does not feel gratuitous, it is in keeping with the storylines.

The story is quite complex, jumping in terms of timezones and eras – and it feels very fast paced – so much so that you don’t want to put it down. It’s the writer’s first novel – and he has been a screenwriter – and you can feel that in the descriptive text he uses – this HAS to be made into a film. One of my friends has admitting to fancying Pilgrim – and I can see what she means (the casting for this film would have to be just right!)

3 thoughts on “Book Review: I Am Pilgrim by Terry Hayes”