A while ago I reviewed some products that Exante diet kindly sent me to try – and since then I’ve bought some of the shakes and bars to have, particularly when I’m in a rush, or need a breakfast before working out that I’m not going to vom back up again after 10 minutes of a cardio workout!!

Anyway – the lovely guys at Exante messaged me to see if I’d like to try some of their new range of cupcakes – well, how could I refuse!

The box arrived and I excitedly opened it looking forward to trying a cupcake – and found out it was packets that you had to make up!  Initially I thought ‘what a faff’ – but I guess it does stop you just stuffing them blindly in your face when you have to think about making them – so maybe that’s a winner?!?

Anyway – whilst I must be the only person in the country (or so it feels from my Facebook timeline on a Wednesday evening) who isn’t Great British Bakeoff obsessed – my daughters are – and what’s the point in having loads of kids if you can’t make use of child labour!  (The day the eldest could make me a G&T was a very proud moment.)

So children 1 and 3 were voted cupcake makers!

Each set of packets (one for the cupcakes, one for the icing) makes 2 cupcakes – so we decided to use 3 of each so all family members could try them.  The 2 cupcakes would be a meal replacement and contain 200 calories and 16.7 grams of protein – so very similar to the shakes and bars throughout the range.

And so – the cupcake baking began: 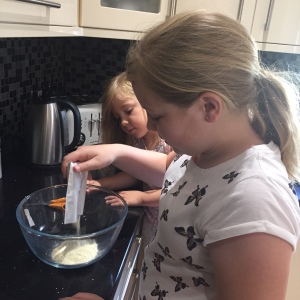 They didn’t exactly rise evenly – and I have to say that I’m not sure Paul Hollywood or Mary Berry would have been that impressed with the presentation!  But surely the taste is the main thing……

And so – the other members of the Price family verdict:

12 year old ‘They work really well as a diet food, because they are so disgusting you never want to eat cupcakes ever again.’

5 year old ‘I don’t want one, they look funny, can I have an apple instead?’

Husband ‘Oh my God these are disgusting, why would anyone eat these, don’t let the children eat them.’

So not exactly universal praise…….

They do taste very synthetic – particularly the icing (it is the brightest pink I have ever seen!) – but I guess I am more used to ‘protein’ based flavours than the rest of the family.  If you were being hardcore on Exante and were really missing cakes then I guess maybe they would be ok – but they are definitely my least favourite of all of the products I’ve tried.  And the faff of making it all also massively counts against them for me.  I’ll be sticking to the shakes and bars in future.

I was sent this product to review for free, but all opinions (as you can probably tell!) are my own.