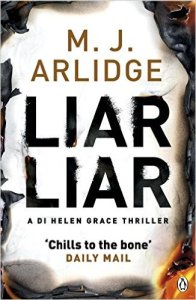 I have really enjoyed the first 3 books in the DI Helen Grace series (Eeny Meeny, Pop Goes the Weasel, The Doll’s House – in that order – as obviously my OCD wouldn’t let me list them in anything other than chronological order!) and so was very excited to see this pop up on my Kindle.  I’d forgotten I’d pre-ordered it (got to love Amazon!)

Because of pre-ordering, I hadn’t read the blurb – but here it is for you:

“In the dead of night, three raging fires light up the city skies. It’s more than a tragic coincidence. For DI Helen Grace the flames announce the arrival of an evil she has never encountered before.

Because this is no firestarter seeking sick thrills, but something more chilling: a series of careful, calculating acts of murder.

But why were the victims chosen? What’s driving the killer? And who will be next?

A powder keg of fear, suspicion and dread has been laid. Now all it needs is a spark to set it off . . .”

Again it was set in Southampton – where I went to Uni (and so I can feel a bit smug that I know how to pronounce Bevois Valley) – and again it was a grim race against time to protect the people of my home for 3 years from a serial killer.  As usual I loved the mix of police investigation and the personal lives of the main detectives – DI Helen Grace, but also her right hand woman Charlie.  The ‘working Mum guilt’ is bad enough as an accountant – but how much tougher it must be when your job puts you in physical danger.

The twists and turns were excellent – as I’ve come to expect from this writer both in his books, and when I see his name pop up as the writer of a similar genre of TV programmes.

I don’t think you would need to have read the first 3 books to enjoy this – but I would definitely recommend starting from the beginning if you haven’t already.

And, I’ve just downloaded the next in the series ‘Little Boy Blue’ to arrive in March 2016 – which I will probably have forgotten about by then, and it will be another lovely surprise!