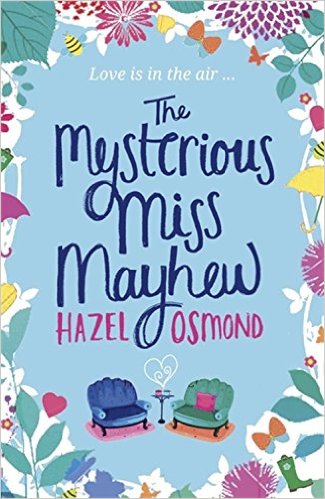 “Tom doesn’t need any more women in his life. He already has a five-year-old daughter, an estranged wife who keeps blocking his efforts to get divorced and a mother who might be having an affair with the vicar. So when Fran Mayhew turns up – years younger and with all the tact of a dinosaur with its backside on fire – she’s just another tricky person to deal with . . . And what’s she doing in his remote part of Northumberland crawling around in graveyards anyway?
But soon Tom discovers that there’s more to the mysterious Miss Mayhew than meets the eye – and that it’s not just his heart he’s in danger of losing.”

I read my first Hazel Osmond book a few weeks ago and really enjoyed it (and very excitedly got a tweet from the author – I am easily excited!!) and so I started my second of her books with high hopes and was not disappointed!!

It was completely different to the Mr Wolfe book – but that’s definitely not a bad thing.  There are an eclectic mix of characters – but they all fit together really well.  I loved Hattie – Tom’s 5 year old daughter – and with a 4 and a 6 year old myself empathised quite a lot with some of her escapades!

The intertwining of stories also works really well – with a mixture of intrigue, romance, suspense etc.  A couple of times it felt like the story had concluded – and then there was a further development!

As well as the traditional romances – between numerous pairs of characters, it also looks at extended family relationships – and the one between Tom and his brother is particularly lovely.

It’s not quite as rammed full of sex as Mr Wolfe is – but there’s still enough, and again, it’s very realistically written – we’re not talking 50 Shades here at all!

I particularly liked the fast forwarded ending, so you could see how things had panned on a year down the line – I often finish a book wanting to know what’s happened – so I LOVED that we found out about everyone.

I will definitely be downloading more of Hazel Osmond’s back catalogue soon!

One thought on “Book Review: The Mysterious Miss Mayhew by Hazel Osmond”