I feel like I’ve ‘known’ Mark Chapman (although he will always be Chappers to me) forever. From when he was the sports monkey on the Sara Cox show, through the Chappers and Dave era, and then to being a sports presenter on MOTD2 and the BBC Rio Olympics coverage.  I knew we were a similar age (from some Googling he is exactly 5 months older than me – but the same school year – although not sure why I would even think that relevant when we’re both 43?!) and I remember weeping when he phoned in to tell Sara and the team that his first child had been born (but I was 6 months pregnant with my first child at the time, so blaming that squarely on my hormones!)

Anyway, when he was recommending his new book on Twitter at the end of last year I downloaded it.  And promptly ignored it on my Kindle for months. 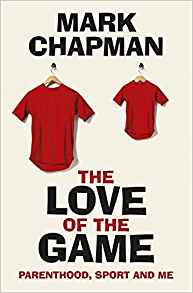 This is the Amazon blurb:

There is huge pride that they are doing so well, mixed with a fair amount of jealousy that actually they are better at a wide range of sport than he ever was. He is passionate about sport and it has played a huge part in his life. His parents encouraged him from a very early age and he wants to pass the baton on to his son and daughters. Although there is every chance he might drop it and have a massive strop instead. He is also very aware of the huge changes in sport today compared to when he was growing up; and he is determined that his own attitude to his son and daughters’ sport – be it football, netball, cricket or gymnastics – will be exactly the same. And he wants to shine a light on grass roots sports – the incredible and largely unsung contribution that volunteers make in the sporting community, without whom – for example – no professional footballer would be in the game today.

Funny, touching, passionate about sport and parenthood, Mark Chapman paints sport as a touchstone for everything important: growing up, becoming a parent, enjoying family time, getting old, learning how to win (and how to lose gracefully), the legacy we all hope to leave our children; in short, life and all that goes into it.”

Quite early on I could completely relate to the book – I remember propping up a small baby to watch the final of the 2003 Rugby World Cup because it was history in the making (not realising quite what an exciting game it would be, and that England winning would make it all the more historical!)

I could also empathise with the coaching of a child’s team – as my husband coached our son’s rugby team for a while – and the politics involved with children’s sports is crazy!  My sister and brother in law are heavily involved in my nephew’s football club – and have been for years – and it is such a massive commitment, and often unappreciated.  My brother in law is also in the Chappers mould of subbing his own son more than any others as he doesn’t want to appear biased! I also  got in to trouble going to watch my nephew play by screaming ‘encouragement’ a little too loudly and agressively (this was before my own children were playing competitive sport) – I’d forgotten I was at the side of a bit of grass in a Hampshire park and not in the stands at Villa Park!  Equally our eldest son and daughter were disappointed there was no corporate hospitality for under 8s footie, as they were used to that when watching Aston Villa #firstworldproblems

The attempt at doing a bun for a gymnastics competition also had me amused – my husband is exactly the same when it comes to doing our girls’ hair – despite being a father to 3 girls (thankfully the eldest being a teenager means she can do her own hair now!)  In fact he said to me the other day that nothing could happen to me ever, as there is no way he could do their hair into buns for their ballet exams!

The book is written with humour and emotion – and seemingly honesty about parenthood and the trials and tribulations of it, generally with a sporting bent.  I did get a bit choked up at times – and had a full on cry at the bit written by Chappers’ friend whose son is autistic and not into sport at all.

To enjoy this book I think you need to be a parent and enjoy sport – but if neither of those apply to you I’m not sure why you’d even consider the book anyway given the title!?! An enjoyable foray into someone else’s parenting world, which I really liked.