We’ve just been on holiday to Devon – and the owners of the holiday house had a huge selection of books to borrow – and this one took my fancy.  I devoured it in 2 sittings  – admittedly with a glass or two of prosecco whilst sitting on my bum in the April sunshine that flooded the decking late afternoon …..

Here’s the Amazon blurb for you…..

“Alexandra Heminsley had high hopes: the arse of an athlete, the waist of a supermodel, the speed of a gazelle. Defeated by gyms and bored of yoga, she decided to run.

Her first attempt did not end well.

You could say it’s about ambition (yes, getting out of bed on a rainy Sunday morning counts), relationships (including talking to the intimidating staff in the trainer shop), as well as your body (your boobs don’t have to wobble when you run). But it’s also about realising that you can do more than you ever thought possible.

Very funny, very honest and very emotional, whether you’re in serious training or thinking about running for the bus, this is a book for anyone who after wine and crisps for supper a few too many times thinks they might . . . just might . . . like to run like a girl.”

I really liked the writing style – it felt like chatting with a mate.  I also empathised with the large boobs.  I think I was all the more empathetic as my baby sister (she’s not actually a baby – just 6 years younger than me) is running the London marathon on Sunday.  I get super emotional watching it on TV – so what I’m going to be like being a spectator at the course watching someone I love run it, I dread to think!!  I wept a number of times reading this book – it was really inspirational – and I also felt it’s given me some top tips as a spectator and sister / friend of runners. I texted my sister to tell her I’d read an excellent book to prepare for her London marathon – and she replied to say she’d read it last year and loved it.  Great minds and all that!

Whilst the book is fundamentally about the author’s running journey (pun intended, and copied from the book) it also looks at family relationship and also mental health. The mental health element has been of interest to me for some time – as I know running has really helped a friend through his own mental health issues – his website is really inspiring.

There was also some travel – as Alex ran marathons abroad – even if her view of the Golden Gate bridge in San Francicso wasn’t what she’s hoped for!!  When the husband and I went to Boston last year, he had to have his picture taken crossing the finish line (whilst we were out shopping!) 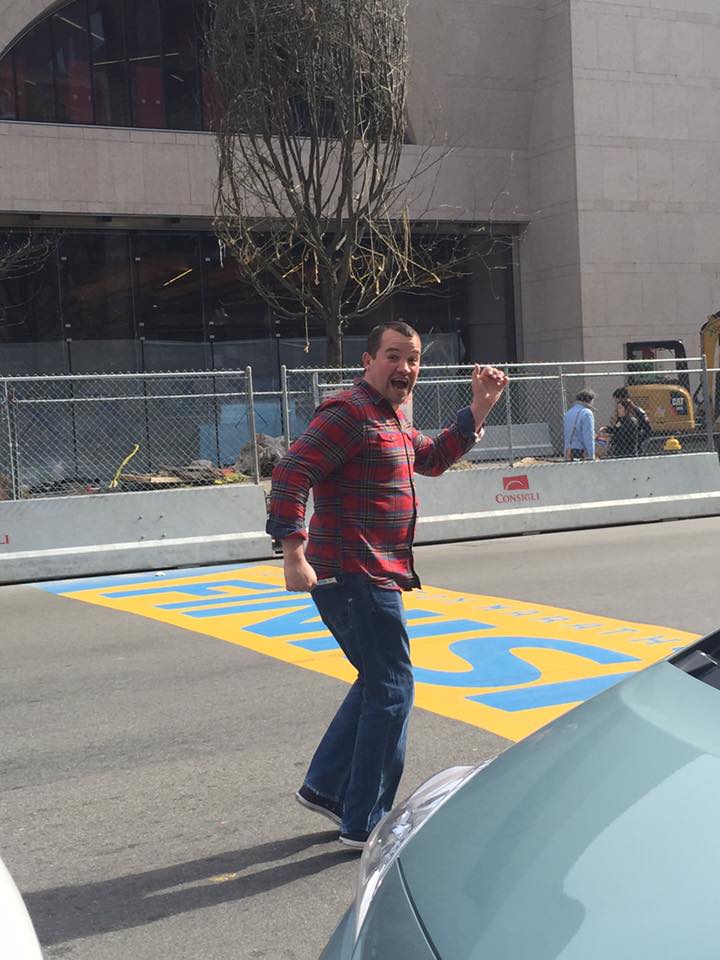 The section on  the history of women and long distance running was also really interesting – I am amazed that so recently women weren’t allowed to compete in marathons.  In 1967 Kathrine Switzer became the first woman to run the Boston Marathon (albeit not quite officially, as she’d registered by her initials and not her name – and officials tried to stop her – unsuccessfully – getting round.  Her boyfriend at the time barged the official trying to stop her to the ground).  Then a few days ago – spookily, as I was reading about her – Kathrine ran the Boston Marathon again on her 50th anniversary.  Now that’s ‘Running Like A Girl’!!

It hasn’t *quite* inspired me to run anywhere myself yet (I’m hoping I don’t get too excited on Sunday and over commit to anything!!) but it did make me go off for a march from the house up to the beautiful Baggy Point near Croyde – only a couple of miles, but you have to start somewhere, and Alex herself started with walking – so who knows……..