A couple of years ago the wonderful Birmingham Children’s Hospital (BCH) created The Big Hoot – where lots of colourful owls descended on the West Midlands for the summer.  After the trail was finished they were auctioned off to raise much needed funds for BCH.

We had great fun doing the trail as a family.

And then I took it all far too seriously in an attempt to view all of them, and turned it into a military operation and the kids didn’t enjoy it quite so much…….

Well – the children are *delighted* to hear that in a similar vein BCH are having The Big Sleuth in and around Birmingham this summer!! 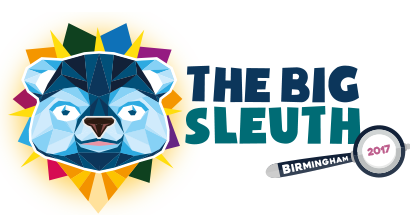 “The departure of The Big Hoot owls left many of you in a feathery flap! Well, the good news is Birmingham’s second adventure is mysteriously taking shape!

Repeating The Big Hoot’s multi-award-winning formula, Birmingham Children’s Hospital Charity and Wild in Art are teaming up to present The Big Sleuth.

To most people, the word ‘sleuth’ means a private detective, but it’s also the collective noun for a group of bears! Bizarre but true.

Birmingham will bring both definitions together in the summer of the 2017 and the Sun Bear, the world’s smallest species of bear (now threatened with extinction) is the inspiration for a brand-new sculpture for this event.

These incredible creatures are sure to inspire creativity and generate plenty of fun for all you sleuth spotters on the trail!  After which, the bears will be auctioned to raise valuable funds for Birmingham Children’s Hospital Charity.”

Now I’m still a bit disappointed that we were out of the country for the owl auction 2 years ago – made worse by the fact that some people I used to work with bought one for their back garden – so this year I’m hoping we can go to the auction as well as have days of endless fun going on a bear hunt!!