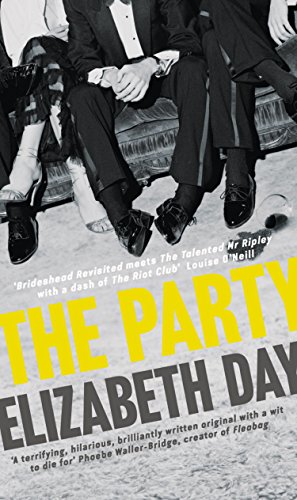 I’ve been meaning to read an Elizabeth Day book for some time – as I really like her when I see her on TV – and also because as a 5 year old I aspired to be Elisabeth Day, as the boy I loved at school had that surname!!  (We coincidentally ended up working for the same accountancy firm after graduation, and he and his lovely family live in the next village to us now – but my marital aspirations towards him are no more!)

I have read rave reviews in Red Magazine and on social media about ‘The Party’ – and as it seemed that it would fit into my 2017 Reading Challenge in the category ‘A book set in two different time periods’ – I pre ordered it for my summer travelling reading.

“‘As the train pressed on, I realised that my life was in the process of taking a different direction, plotted according to a new constellation. Because, although I didn’t know it yet, I was about to meet Ben and nothing would ever be the same again.’
Martin Gilmour is an outsider. When he wins a scholarship to Burtonbury School, he doesn’t wear the right clothes or speak with the right kind of accent. But then he meets the dazzling, popular and wealthy Ben Fitzmaurice, and gains admission to an exclusive world. Soon Martin is enjoying tennis parties and Easter egg hunts at the Fitzmaurice family’s estate, as Ben becomes the brother he never had.
But Martin has a secret. He knows something about Ben, something he will never tell. It is a secret that will bind the two of them together for the best part of 25 years.
At Ben’s 40th birthday party, the great and the good of British society are gathering to celebrate in a haze of champagne, drugs and glamour. Amid the hundreds of guests – the politicians, the celebrities, the old-money and newly rich – Martin once again feels that disturbing pang of not-quite belonging. His wife, Lucy, has her reservations too. There is disquiet in the air. But Ben wouldn’t do anything to damage their friendship.
Would he?”

I started reading this on a transatlantic flight – and devoured it all in one sitting – foregoing all of British Airways’s film offerings – which I think says a lot about how much I enjoyed it!

The book cycles between Martin’s life growing up, Ben’s 40th party and the aftermath of it – told in turn by Martin and his wife Lucy.  It’s very intricate (which made me think how good the editor must have been as well as the author – I am such a geek!) and the pace builds up brilliantly.

It is very clever – and similarities with real life people I am sure are totally deliberate!  Boys from posh schools, going on to Oxbridge and then becoming MPs and Prime Minister and including their mates in their political inner circle – remind you of anyone?!

The university period is exactly when I was at uni – albeit not Cambridge (my Head of Sixth Form never did forgive me for not going to my Newnham interview!) – so I enjoyed the reminiscing!

Despite the clear personality defects of all of the main characters at different times, I was always rooting for Martin and Lucy – in different ways.  Lucy was initially cast as the dowdy wife – but her quick thinking smart comebacks to some of the other characters were just perfect.

I don’t want to give too much away – I hate reviews that ruin the story for others – but would definitely recommend you read this book!  And I will definitely be reading more by Ms Day – clever, sharp, well written and very enjoyable.

3 thoughts on “Book Review: The Party by Elizabeth Day”