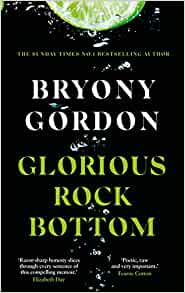 I really enjoyed Bryony Gordon’s book about her mental health struggles, so when I saw her new book about alcoholism had come out, I actually purchased it (a rarity for me!).  Having recently discovered podcasts to listen to in the car, I thought I’d give Audible a go again (I dabbled some years ago but never got into it) – and because I like a plan, thought I’d do ‘non fiction’ audiobooks in the car – and leave the fiction for books at home.  Interestingly at a recent bookclub Zoom, some of the other members have non fiction downstairs and fiction upstairs – so it’s clearly ‘a thing’ to differentiate!

Here’s the blurb about the book:

“Bryony Gordon is a respected journalist, a number-one bestselling author and an award-winning mental health campaigner. She is also an alcoholic.

In Glorious Rock Bottom Bryony opens up about a toxic twenty-year relationship with alcohol and drugs and explains exactly why hitting rock bottom – for her, a traumatic event and the abrupt realisation that she was putting herself in danger, time and again – saved her life. Known for her trademark honesty, Bryony re-lives the darkest and most terrifying moments of her addiction, never shying away from the fact that alcoholism robs you of your ability to focus on your family, your work, your health, your children, yourself. And then, a chink of light as the hard work begins – rehab; twelve-step meetings; endless, tedious, painful self-reflection – a rollercoaster ride through self-acceptance, friendship, love and hope, to a joy and pride in staying sober that her younger self could never have imagined.

Now, I had high hopes for this book and really wanted to enjoy it and find it helpful in my own relationship with booze – but initially I didn’t. I found Bryony sharing her rock bottom really disturbing. Don’t get me wrong – I’m all for oversharing – the whole village knows about my piles – but this was really disturbing stuff. Sexual encounters with almost strangers, being repeatedly unfaithful to her husband, endangering her child – and it upset me both to read it – but also to think of them reading it. It felt really intrusive and things that no child should ever read about their Mum (I guess I’m more careful of this now – when the kids were little I’d share with wanton abandon, but teenagers are sh*ts – and my daughter’s ‘friends’ would find photos and info off this very blog to take the p*ss out of her, and so I’m more careful – and thus was worried about Bryony’s daughter Edie in the future.) It felt like it was being deliberately written to shock – which I guess it was – but it felt like I was a voyeur for listening to it…..

However, I persevered, and I’m so pleased I did.

The love Bryony has for her family is clearly what ‘saved’ her along with her determination not to let drugs and alcohol take everything from her – probably including her life. This shines through in her writing – and hearing her read her own words, and her voice catch with the emotion a few times, was deeply moving.

Her description of rehab (private, as a day patient) and the 12 step programme – without breaking confidences – was still really informative.

The end of the book had me totally weeping buckets and I arrived at work having to explain why my mascara was all down my face!

This is not a self help book, this is alcoholism and drug addiction from Bryony’s personal point of view. It is not preachy, it is not expecting everyone to give up booze, it very much distinguishes between alcoholics and people who can consume alcohol at a sensible level. I will sometimes have a ‘non-alcoholic’ beer, just because I don’t want the fuzzy head of a couple of beers, but the chapter where Bryony has a non-alcoholic beer binge does highlight the fact that non-alcoholic drinks are for non-alcoholics – a distinction I hadn’t really considered before.

After my initial reticence I did enjoy the book – and I’m sure Bryony’s husband was completely supportive in her writing it – and they will deal with Edie being told about the contents in an age appropriate and loving way in the future and I shouldn’t have got all worked up about it.

At the end of the day, their loving family unit – and their conkers – have helped Bryony conquered her demons.