I’ve been lucky enough to have read the last two books by Claire Douglas, and so when I was offered the chance to read her next one in advance of its publication – I said yes please!

“When pregnant Saffron Cutler and her boyfriend Tom move into 9 Skelton Place, they didn’t expect to find this.
Two bodies, buried under the patio over thirty years ago.
When the police launch a murder investigation, they ask to speak to the cottage’s former owner – Saffy’s grandmother, Rose, whose Alzheimer’s clouds her memory.
But it is clear she remembers something . . .
What happened thirty years ago?
What part did her grandmother play?
And is Saffy now in danger? . . .“

The book kicks you off right into the deep end with a body found in the garden of Saffy and Tom’s house as they’re having an extension built. Quickly followed by a second corpse. They’ve only recently moved in having been gifted the house by Saffy’s grandmother who has moved into a home suffering with dementia – although Saffy never knew her Grandmother owned the house in the quaint village Beggars Nook before that.

There is then, obviously, an investigation into who these two bodies are.

Saffy’s Mum Lorna flies over from Spain – where she’s living with her current younger man – and they visit their Grandmother / Mother Rose discussing with her – through the clouds of Alzheimers – who the victims may be.

Some of the chapters are told from the point of view of Saffy, some by Lorna, some by Rose – and some by Theo – a seemingly unconnected chef from Yorkshire with a horrible father. You suspect that he must be connected (otherwise it would be a very strange book!) but you don’t know why.

There are LOADS of twists and turns. Some of these I guessed and some I didn’t. I actually quite liked that as I could feel smug when I pre guessed a twist – but still be shocked with some of them!

It continued at pace – and consequently I was desperate to keep reading as it was so good and really kept my interest.

Whilst being a murder mystery at heart – the book also looks at parent / child relationships in great depth – and all in quite unique ways.

Overall this was a great read and I would highly recommend it. It was originally planned to be published today – but has been pushed back until the end of September 2021 – so plenty of time to pre order!

Thanks to NetGalley and the publisher for my ARC in exchange for an independent review.

I’d read and enjoyed ‘Then She Vanishes‘ by Claire Douglas last year – so when the publisher emailed to ask if I’d like to read her new book – Just Like The Other Girls – I jumped at the chance.

Una Richardson is devastated after the death of her mother. Hoping for a fresh start, she responds to an advertisement and steps into the rich, comforting world of elderly Mrs Elspeth McKenzie.
But Elspeth’s home is not as safe as it seems.
Kathryn, her cold and bitter daughter, resents Una’s presence. More disturbing is the evidence suggesting two girls lived here before.
What happened to the girls?
Why will the McKenzies not talk about them?
As the walls close in around her, Una fears she’ll end up just like the other girls. . .”

I enjoyed the book right from the beginning.  Una’s Mum has died, so she’s working as Elspeth’s companion  – and the book begins with her start in this new life.  Slowly she uncovers that her 2 predecessors have ended up dead – in totally different circumstances – but none the less, both dead.  Una starts investigating this as she’s concerned she doesn’t become the next fatality.  Her lovely relationship with her friend Courtney is also centre to this (I think Courtney rocked right through the book, and do hope she had a happy ever after).

Elspeth is clearly not as infirm as she wants everyone to believe, and her grumpy daughter Kathryn obviously has secrets too.  Elspeth doesn’t seem to care about Kathryn’s sons – her grandsons – at all, and Kathryn seems to keep her husband and sons very separate from her mother – despite spending a lot of time with Elspeth and helping to run the family businesses.

The story twists and turns brilliantly – with hints and clues here and there – some that are crucial and some that are total red herrings – but you’re not sure which is which until the very very end.

I don’t want to give too many of the twists away – as you need to experience them yourself with no spoilers – but boy they are good.

The chapters are written from different people’s points of view – and you ‘hear’ other people’s thoughts too, although you’re often not sure who you are ‘hearing’.  (Actually – I think I might want to go back to see if you are hearing the same person each time?)  But this writing style makes it exciting and the whole book has a real momentum.

By the time I got to the last few chapters I was almost holding my breath! And I was really happy with the way it all concluded for everyone – and it 100% wasn’t what I expected at all.

A massive thank you to NetGalley and the publisher for my ARC – and I would highly recommend you pre order it for when it’s out in August 2020. 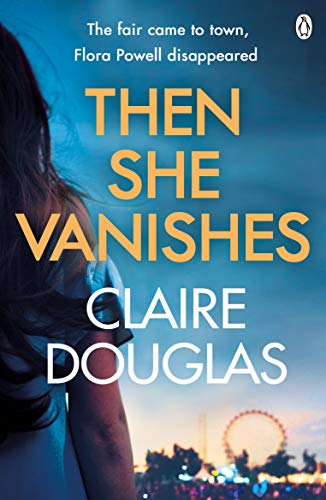 I was emailed by the publisher to ask if I’d like to read this new thriller.  I’ve not read anything by Claire Douglas before, but the blurb appealed – so I said ‘yes please’!

Here is the aforementioned blurb:

“THE ONLY THING MORE SHOCKING THAN THE FIRST CHAPTER . . . IS THE LAST. .
Everything changed the night Flora Powell disappeared
Heather and Jess were best friends – until the night Heather’s sister vanished.
Jess has never forgiven herself for the lie she told that night.
Nor has Heather.
But now Heather is accused of an awful crime. And Jess is forced to return to the sleepy seaside town where they grew up, to ask the question she’s avoided for so long:
What really happened the night Flora disappeared?”

The book is set in the present day (well, actually 2012 – but it feels like the present day) and then back in the mid 90s.  It flicks between the two time periods really well – and totally evokes the feeling of that time.  I was a similar age to the characters in the 90s and the references – particularly to music and clothing were spot on!

The chapters are told from different characters perspectives which also keeps the momentum up.

It was one of those books that you want to read quickly to see how it all develops.  The twists and turns are so exciting.  Just when you think you’ve sussed what’s going on – another curved ball is thrown!  I can’t tell you too much about the plot without giving it away – and you need to be shocked as a reader as it unfolds!

The literary style is not high brow – but that didn’t matter to me – I just enjoyed the storyline and it’s fast pace.

The characters all had flaws – and sometimes you wanted to give some of them a good shake – but I was still interested to see what happened to them all – and the relationships between them.

The blurb had said the only thing more shocking than the first chapter is the last – and I have to say that because of that I’d kind of guessed what was going to happen – but only right near the end of the book.

Overall a great read and I would recommend downloading it when it comes out on Kindle next week.  I’ll also be checking out the authors back catalogue in the future.

A massive thank you to the author, publisher and NetGalley for my advanced review copy in return for a review.