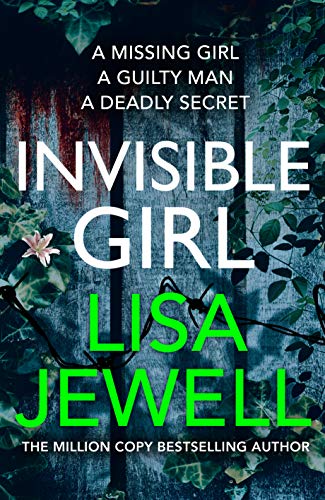 I’m sure I’ve read books by Lisa Jewell before – but clearly not since I started blogging about books, as my back catalogue of posts reveals none.  Anyway – I was lucky enough to have an advance review copy of ‘Invisible Girl’ from NetGalley.

“MIDNIGHT: In an area of urban wasteland where cats hunt and foxes shriek, a girl is watching …
When Saffyre Maddox was ten, something terrible happened, and she’s carried the pain of it ever since. The man who she thought was going to heal her didn’t, and now she hides, learning his secrets, invisible in the shadows.
Owen Pick is invisible too. He’s never had a girlfriend; he’s never even had a friend.
Nobody sees him. Nobody cares.
But when Saffyre goes missing from opposite his house on Valentine’s night, suddenly the whole world is looking at Owen.
Accusing him, holding him responsible for Saffyre’s disappearance …
INVISIBLE GIRL: an engrossing, twisty story of how we look in the wrong places for bad people while the real predators walk among us in plain sight.”

The book is told from the perspective of 3 different people – Saffyre (it took me a while to realise this was probably said Sapphire – reminiscent of Hermione in the Harry Potter books being Her-me-own in my head until the first film came out!) and Owen who are mentioned in the blurb – and then Cate.  Cate lives opposite Owen with her 2 teenagers and her husband Roan – who’s path has crossed with Saffyre in the past.

The books starts slowly – and you can see that the 3 threads of the story are going to intertwine, but not necessarily how.  It’s told over a relatively short time period – with these days being written about from different angles in a very clever way – with some flashbacks to explain  the situations people are in.

The pace builds and builds and twists and turns in a brilliant way.  Each of the main characters – and supporting characters – are explored, and you’re never sure whose team you’re on. And who’s a ‘baddy’ and who’s a ‘goody’ – in fact there is a total blurring of good / bad throughout.

I guess I empathised with Cate the most – as we’re a similar age and with teenage kids. However all of the characters are really well written and very different to each other.   One review I read said you needed to be familiar with the geography of that part of London to fully appreciate the book – but that’s rubbish – not knowing the area did not detract from my understanding of the book at all.

I don’t want to give anything away about the storyline as you need to experience the twists and turns for yourself – and spoilers would totally ruin the pleasure of this book.

But I would highly recommend pre ordering it for when it comes out in August – it was really very good and kept me guessing right to the end.