I was recommended this book by a friend (whose judgement I totally trust on books) but had not heard anything else about it – sometimes I think that’s the best way – to go in without any preconceived ideas! 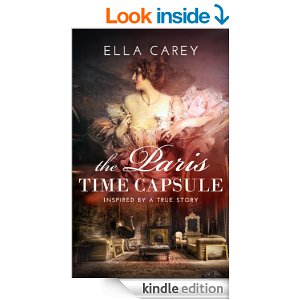 I found out afterwards that it was loosely based on a true story – which makes it all the more amazing.

“Inspired by the fascinating true story of a treasure filled apartment that was abandoned in Paris for seventy years,The Paris Time Capsule is a blend of romance, history and mystery that will take you on a journey through France, from the charms of Paris to Provence’s delectable vineyards and villages …

In 2010, New York photographer Cat Jordan is fighting against her difficult past. But when a stranger dies in Paris, Cat finds herself the sole inheritor of an apartment in the ninth arrondissement that has been abandoned for seventy years, since its mysterious owner, Madame de Florian, fled on the eve of the Nazi invasion in 1940.

A stash of love letters belonging to the owner’s grandmother, the infamous Belle Epoque courtesan Marthe de Florian, and the appearance of the beautiful and mysterious Isabelle de Florian’s grandson, Loic Archer, leads Cat in search of the reasons why Isabelle kept her Paris apartment a secret until her death, and why she left her entire estate to Cat.

As Cat unravels the story, she too embarks on her own journey, realising that the secrets in the apartment may finally unlock the future…

An enchanting tale, inspired by a fascinating true story, filled with unforgettable characters, each caught in the relentless turmoil of their own generation. Ella Carey’s The Paris Time Capsule will linger in your thoughts long after you have finished it.”

So – it centres around a flat in Paris that has been left exactly as it stood and untouched for 70 years. The central character, Cat, who has been left this by a Frenchwoman she didn’t know, then investigates why. It takes you around different areas of France and really evokes the feelings of the different regions. Yet again I’ve read a book about Paris and France that makes me want to go and visit very soon!

It is beautifully written and flows really well. I have to confess to getting a little confused sometimes about some of the historic characters – but I think that’s more my fault for reading it piecemeal whilst trying to get kids to go to bed rather than giving it my undivided attention (the joy of being a reading Mum!)