I have loved the previous 2 books by M J Arlidge about DI Helen Grace – so was pleased when this popped up on my Kindle (I’d pre-ordered it when I read the previous book ‘Pop Goes The Weasel‘ last year). 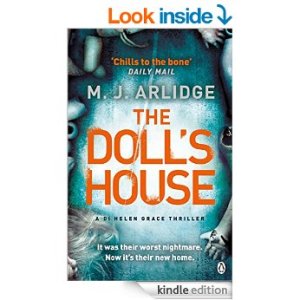 Here is what the Amazon blurb says:

“A young woman wakes up in a cold, dark cellar, with no idea how she got there or who her kidnapper is. So begins her terrible nightmare.
Nearby, the body of another young woman is discovered buried on a remote beach. But the dead girl was never reported missing – her estranged family having received regular texts from her over the years. Someone has been keeping her alive from beyond the grave.
For Detective Inspector Helen Grace it’s chilling evidence that she’s searching for a monster who is not just twisted but also clever and resourceful – a predator who’s killed before.
And as Helen struggles to understand the killer’s motivation, she begins to realize that she’s in a desperate race against time . . .”

You would not need to have read ‘Eeny Meeny’ or ‘Pop Goes the Weasel’ (although I would highly recommend that you do!) before you read this – it would stand alone – but I very much enjoyed revisiting DI Helen Grace and some of the other characters. It definitely builds on the prior books so there would be ‘spoilers’ if you tried to read them retrospectively.

I’ve actually got to like Helen more with each book – I guess as we get to know her better and understand her more.

It’s a twisting and turning thriller as usual – and again set in Southampton (my stomping ground for Uni – which I think I must remember with rose tinted glasses, as the area I lived in again is described as rough!!) The stories interlink both in terms of historic crime, current crime and the personal lives of the protagonists both police and villains. Lots is interlinked and only concludes right at the end – but I was pleased the loose ends were all tied up.

I didn’t feel this was quite as gory as the previous books – but maybe I’m just becoming immune to it, as I’m a fairly recent convert to thrillers!

This – along with the other books in the series – would make great TV dramas (unsurprisingly given Mr Arlidge is also a script writer – I was slightly over-excited to spot his writing credit in the last series of Silent Witness on BBC1!)

I was pleased to see that this is no longer a trilogy and I have pre-ordered book number 4 for later this year!