Giovanna Fletcher properly hit my radar when she was body shamed a few days after her 2nd child for not having snapped back into celeb shape immediately.  (I remember a similar incident after my baby number 3 when my son’s friend asked how I could still have a bump when the baby was out and had I saved another one in there?  It was 24 hours post partum, but he was only 6 years old so it was forgivable!)  After that I started following her on various social media, and liked the fact that despite her and her husband (Tom from McFly) having celebrity status, she shared the good, bad and the ugly of parenthood.

Giovanna’s book ‘Always With Love’ came out – but I realised it was the second instalment in a series, so I needed to read the first one first – hence I downloaded ‘Billy and Me’. 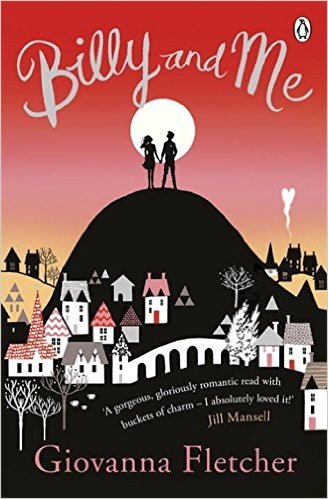 Here is the Amazon blurb:

“A gorgeously romantic novel about fame, friendship and falling in love
Sophie May has a secret.
One that she’s successfully kept for years. It’s meant that she’s had to give up her dreams of going to university and travelling the world to stay in her little village, living with her mum and working in the local teashop.
But then Sophie unexpectedly meets the gorgeous Billy Buskin – a famous actor with ambitions to make it to the top. As they begin to grow closer, Sophie finds herself whisked away from the comfort of her life into Billy’s glamorous – but ruthless – world.
After years of shying away from attention, can Sophie handle the constant scrutiny that comes with being with Billy? How much is she prepared to give up along the way? And is their love strong enough to keep them together against the odds?
Charming, heart-warming and utterly romantic, Billy and Me is an unforgettable story that will completely capture your heart.”

Now I suspect I am slightly older than the reader this is aimed at (Zoella chose it for her book club which kind of backs up the fact that 40 something mothers of 4 kids aren’t target market!) but I still really enjoyed it.  It was a fun escapist read – but still well structured and well written.  Sometimes I wanted to give the main character Sophie a bit of a shake and tell her to get a grip – but I’m guessing that could be the old cynic in me?! Overall a relaxing, easy to dip in and out of, charming read.

I enjoyed it so much, I immediately downloaded the sequel (it’s like reading books the ‘box set’ viewing stylee!!) I should say there is a Christmas special that fits between the 2 books, but my stupid Kindle wouldn’t download it – but I don’t think it mattered that I hadn’t read it, as you were soon brought up to speed on what had happened in the intervening period.

Here’s the Amazon Blurb for ‘Always With Love’:

” The next much-anticipated romantic chapter in Billy and Sophie’s love story from bestselling author Giovanna Fletcher.
Sophie’s got used to being the girlfriend of Billy Buskin, the biggest movie star in the world. Sort of.
But when she and Billy take a trip to visit his family in Los Angeles, she quickly discovers she’s totally unprepared for the chaos of Hollywood, the paparazzi and Billy’s controlling mother.
And when Billy extends his stay in LA, leaving Sophie to fly home to Rosefont Hill alone, it seems there’s more than just miles between them.
Now Sophie must decide if they can overcome their differences for good. Because not every love story lasts the distance . . .”

Again I really enjoyed it – and again I found Sophie a bit annoying at times – but overall I enjoyed the twists and turns.  Right up until the end I wasn’t sure which way things were going to end – but it was fun.

I’m not sure my teenage daughter is a million miles away from reading this (maybe a couple of sexy bits mean she’s not quite there yet!) – but it would appeal to younger readers too.  But enjoyable for an older reader like myself who fancies a ‘comfort’ read – and perfect to read with a stinking hangover after a raucous 40th birthday party for a friend last night………

Roll on the next book!!

One thought on “Book Reviews: ‘Billy and Me’ and ‘Always with Love’ by Giovanna Fletcher”