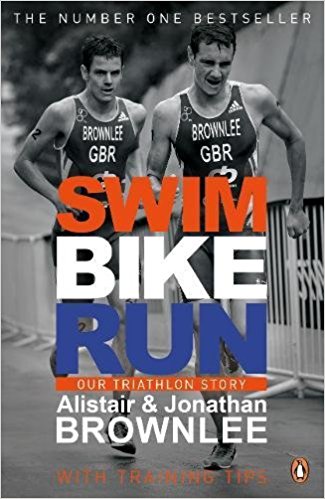 A friend recommended this for the ‘a book about sport’ in our 2018 reading challenge.  She’s not a big sports fan – but had really enjoyed this – so I followed suit.

A Number One Bestseller
This is the story of how two skinny lads from west Yorkshire became the best triathletes in the world.
Meet the Brownlees: Olympic Champion Alistair, World Champion Jonny. Brothers, training partners, rivals. They have obliterated the competition and set new standards for swimming, biking and running.
In this revealing, often very funny book they take us inside their world. It’s both a riveting story of the races, the success and the brotherly rivalry, as well as a guide to triathlon with sections on how to swim, bike and run and packed with advice on nutrition, injury, and mental approach.
This book will appeal to readers of cycling and running books like Mark Cavendish’s Boy Racer and Running with the Kenyans, as well as fans of Chrissie Wellington’s A Life Without Limits and Andy Beckett’s Can’t Swim, Can’t Bike, Can’t Run.
‘Sport has two new heroes: a couple of nice lads from Yorkshire’ The Times
Alistair Brownlee, 24, is a British triathlete from Yorkshire. He is the reigning Olympic champion, a back-to-back European champion and a two-time World champion.
Jonathan Brownlee, 22, is also a British triathlete from Yorkshire. He is the reigning World Champion, a two-time World Sprint champion and an Olympic bronze medalist.”

Bizarrely, the weekend before I started reading this, I’d been chatting to a friend whose eldest daughter does triathlons (like the Brownlees, she started as a competitive swimmer and has moved across) and she told be about the wetsuit temperature rules (and that the good swimmer prefer not to wear them) – and exactly the same information was shared within the first chapter or so – it felt like fate!  Given it’s the only triathlon fact I knew, I felt quite smug.

The book follows their lives and alternates between Alistair and Jonny telling the story.  It’s really interesting – even for someone like me who knows little about their sport (although, was screaming at the TV during their 2012 Olympic race – and any other time I’ve watched them #armchairviewer)

Whilst the sport story is interesting – and their dedication to their training – the relationship between them as brothers and competitors is also explored – which is very interesting indeed.

I did really enjoy it – it’s not a type of book I often read – but I kind of felt it finished too soon.  I would like to have known what happened afterwards and more recently (although I appreciate the book was written before their dramatic 2016 race in Mexico where Alistair practically carried Jonny across the line in a world championship race)

I almost felt guilty too – because the one time ever that Alistair has been disqualified in a race was last weekend – as I was finishing the book.  I sort of felt responsible – because I was reading about him and therefore super interested in the results…. #guiltcomplexextraordinaire.

As well as being interesting and informative – it’s also really funny at times – they seem like they would be a real laugh (and they like cake!)  Definitely worth a read.