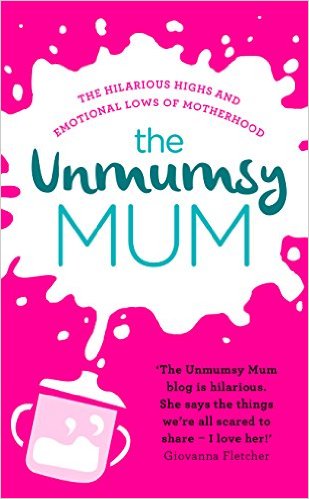 “THIS IS NOT A PARENTING MANUAL. THIS IS REAL LIFE.

The Unmumsy Mum writes candidly about motherhood like it really is: the messy, maddening, hilarious reality, how there is no ‘one size fits all’ approach and how it is sometimes absolutely fine to not know what you are doing. The lessons she’s learnt while grappling with two small boys – from birth to teething, 3am night feeds to toddler tantrums, soft play to toilet training – will have you roaring with laughter and taking great comfort in the fact that it’s definitely not just you…”

I’m not sure I’m target market for this book – as I’m already 13 years into my Mum ‘journey’ and with my ‘baby’ being 4 and a half – but I really like what The Unmumsy Mum posts on Facebook and her blog, so I downloaded it to my Kindle.

I LOVED this book.  It was laugh out loud funny at times – but also had me weeping today (the chapter where she talks about being a Mum but without her own Mum being around – it was so beautifully written and so moving. It made me think more about my husband not having his Mum around whilst we’re going through our own stab at parenthood as she passed away exactly a year before our eldest was born.).

I think this should be bought for every first time Mum so they can know what parenthood is really all about.  I was lucky that a friend had her first baby about 9 months before me – and we were very similar control freak / career girls until then – and she freely admitted the first 6 weeks were HIDEOUS.  It was such an unusually honest opinion and helped me no end – and having that written down in the public domain in a book is such a great support for people (the only book I read before having my first was Gina Ford #howstupidwasI?!).

Despite having 4 kids, I am most definitely not a mumsy mum – in fact I remember my oldest friend’s Mum being shocked when I had more than 2 kids, as apparently I was the least maternal amongst my sisters!! Therefore I empathise totally with The Unmumsy Mum lots.

The style of writing is great – and honest (and sweary – which is totally me)  Whilst it’s primarily about being the parent to small people it does cover other topics really well.  The ‘why have kids if you’re going to moan about them?’ section was excellently written.  It also  made me think a lot about comparing the sh*t you’re going through with what other people go through.  A friend recently lost her 11 year old son to a brain tumour which was utterly devastating – and hopefully something I never have to experience first hand – but I was at risk of thinking everything in my life was inconsequential compared to that – but some things, for us, are still important – and this helped me realise that, whilst still being there to support my friend and her family.

But don’t for one second think it’s all deep and meaningful!  It is brilliantly funny and, to quote The Unmumsy Mum herself, full of sh*ts and giggles – exactly like parenthood is.