I’ve mentioned before that I have a friend in the publishing industry who sometimes lets me have sneak previews of books (she’s ace!) and this is the one I had to take on my summer holiday.  Both the lender, and a couple of other friends who’d read it RAVED – so I had high expectations – and I was not disappointed! 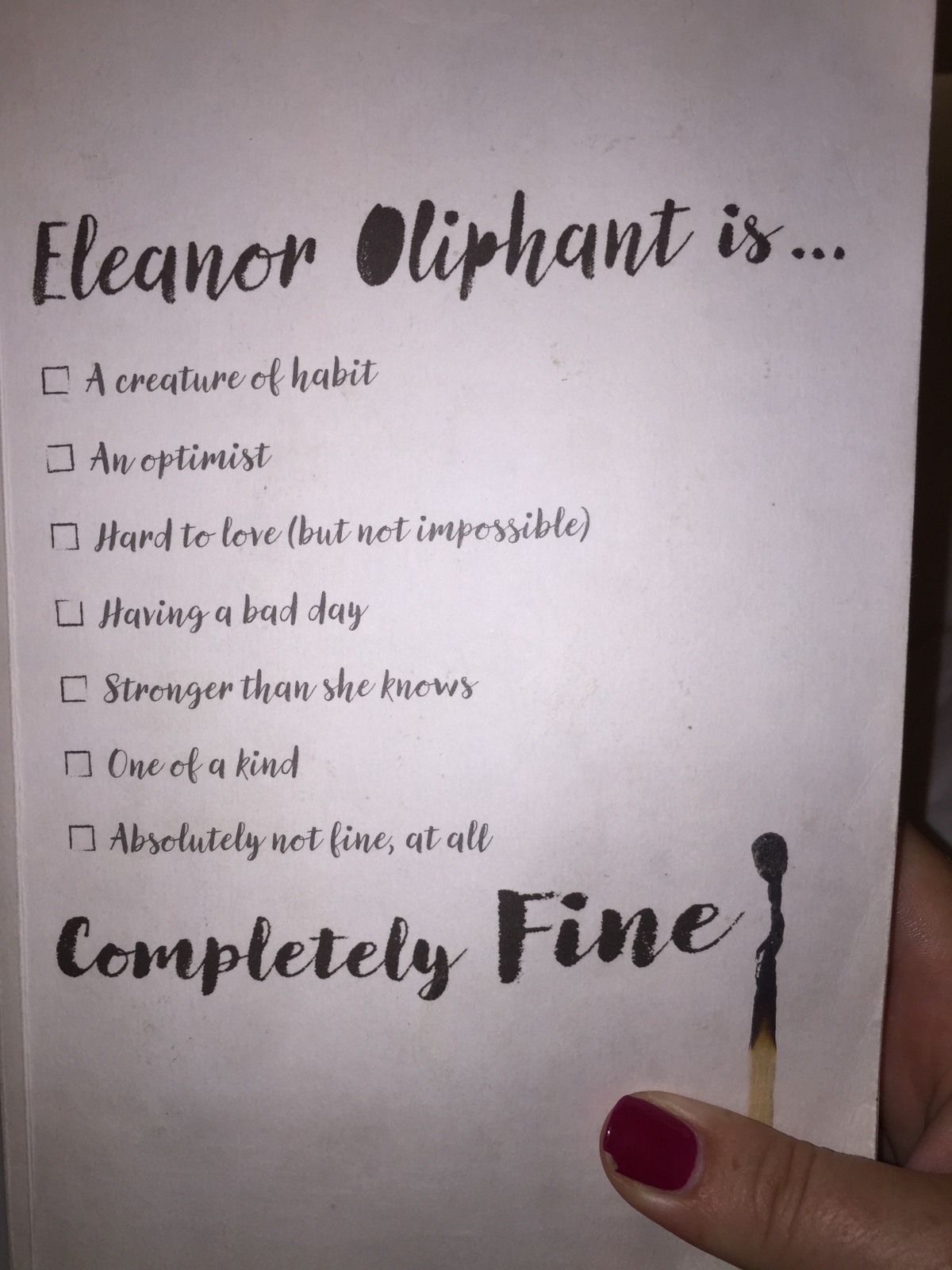 Usually I quote Amazon blurb here – but this book isn’t out until early 2017 – however with a small amount of Googling I found these quotes:

Madeleine Milburn Literary Agency: “Eleanor Oliphant is a bit of an odd ball. She struggles with appropriate social skills and tends to say exactly what she’s thinking. That, combined with her unusual appearance (scarred cheek, sometime wearer of an eczema glove), means that Eleanor has become a bit of a loner – or ‘self-contained entity’ as she calls it. Nothing is missing in her carefully timetabled life and phone chats with ‘Mummy’ (in prison for crimes unknown).

But everything changes when Eleanor falls for the local Hipster-band frontman, Johnnie Rivers. As Eleanor prepares herself for her inevitable union with the object of her desire (appropriate attire, new laptop for Instagram stalking), she inadvertently befriends the new guy from her office, Raymond.

As Eleanor navigates the waters of obsessive love and her long-distance relationship with ‘Mummy’, she realises she can only overcome the horrors of her past if she accepts a little help from Raymond…

Filled with unabashed wit, Eleanor Oliphant follows its quirky and troubled female narrator as she realises that the only way to survive her current state of mind is to open her heart to friendship”

Lucy Cavendish College, University of Cambridge “I hadn’t been expecting it to happen that night, not at all. It hit me all the harder because of that. I’m someone who likes to plan things properly, prepare in advance and be organised. This came out of nowhere; it felt like a slap in the face, a punch to the gut, a burning.

I’d asked Billy to come along with me, mainly because he was the youngest person in the office; for that reason, I assumed he’d like the music. I heard the others teasing him about it when they thought I was out at lunch, sniggering like schoolgirls. I suppose I could have gone alone. It’s just that I’m very, very tired of always doing things alone. I knew nothing about the concert, hadn’t heard of the band. I was going out of a sense of duty, because I’d won the tickets; they were donated to the Christmas charity raffle, and I knew people would ask about it when the email went round the office.

Billy had a pint and I was drinking sour white wine, warm and tainted by the plastic glasses they made us take into the hall. What savages they must think us! Billy had bought the round, to thank me for inviting him. There was no question of it being a date – we looked like mother and son on an outing.  I suspected he preferred boys anyway.

We drank from the plastic glasses, got comfortable in our seats as the lights went down. Billy hadn’t wanted to watch the support act, but I insisted. Everyone supported someone else at one time, back before they made it big themselves. You never know if you’ll be bearing witness as a new star emerges, never know who’s going to walk onto the stage and blow you away.

He walked onto the stage and blew me away.”

Harper Collins Indie Thinking: “Eleanor Oliphant leads a simple life. She wears the same clothes to work every day, eats the same meal deal for lunch every day and buys the same two bottles of vodka to drink every weekend.

Eleanor Oliphant is fine. Nothing is missing from her carefully timetabled life. Except sometimes, everything.

Without doubt this is the best and most different book I have read in a long time.  It is quite simply brilliant.

I admit to bonding a little bit more than I should with Eleanor over our similarities (we both work in accounts, we both sport eczema gloves now and then for our scabby hands, amongst other things) – but the one paragraph that had me totally nodding in agreement with was about sport.

“Sport is a mystery to me.  In primary school, sports day was the one day of the year when the least academically gifted students could triumph, winning prizes form jumping fastest in a sack, or running from Point A to Point B more quickly than their classmates.  How they loved to wear those badges on their blazers the next day! As if a silver in the egg and spoon race was some sort of compensation for not understanding how to use an apostrophe.”

Eleanor is just such a lovely central character and the book is told totally from her perspective – which is, admittedly, not the most normal of perspectives in many ways.

This is a debut novel for the Scottish writer Gail Honeyman – and my earlier Google stalking found out that it’s been sold for a huge sum – and rightly so. This could very well end up being a film – move over Bridget Jones – Eleanor Oliphant is in the house!

I don’t want to write much more – as you need to get to know Eleanor yourself, that’s the whole point of the book – but

YOU MUST READ THIS BOOK!!!