Last year – I gave ‘Eleanor Oliphant is Completely Fine’ as a gift to a number of friends because I loved it so much and just wanted to share the love.  Thankfully they all agreed it was a great book (could I have remained friends with them if they hadn’t?!?)  One of these friends reciprocated recently, sending me an Amazon gift card with the explicit instructions that I had to buy this book!  She’d been gifted it too – so was passing on the book love (a trend I very much plan to perpetuate): 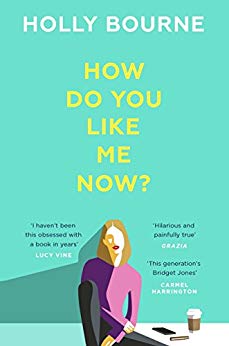 “‘Turning thirty is like playing musical chairs.  The music stops, and everyone just marries whoever they happen to be sitting on.
Who the f*ck is Tori Bailey?
There’s no doubt that Tori is winning the game of life. She’s inspired millions of women to stick two fingers up at convention with her bestselling memoir, and she has the perfect relationship to boot.
But Tori Bailey has been living a lie.
Everyone around her is getting married and having babies, but her long-term boyfriend won’t even talk about getting engaged. And when her best friend Dee – her plus one, the only person who understands the madness – falls in love, suddenly Tori’s in terrifying danger of being left behind.
When the world tells you to be one thing and turning thirty brings with it a loud ticking clock, it takes courage to walk your own path.
It’s time for Tori to practise what she’s preached, but the question is: is she brave enough?
The debut adult novel by bestselling author Holly Bourne is a blisteringly funny, honest and moving exploration of love, friendship and navigating the emotional rollercoaster of your thirties.”

“Why can’t he support a better football team? One that actually wins? If you’re going to chain your emotional well-being to the outcome of a football team, why pick Aston Villa?”

but I didn’t take it personally!!

The very clever observational writing – initially of wedding etiquette in recent times is cringeworthingly good.  And I am going to make a suggestion to one of my friends who is quite senior in the West Midlands police about getting copies of thumb print trees from weddings to keep as evidence for future crimes!!

Social media is an integral part of the storyline – and it’s interesting to see it played out so much.  I am guilty of being a massive oversharer – but I like to think I overshare the good and the bad – so you might get a post about an amazing holiday in Abu Dhabi – but you’ll also know all about my piles (my husband is concerned he can’t go to buy a loaf of bread in our village shop without someone asking about my arse and its problems!!)  However I know an awful lot of people who filter (metaphorically and photographically) what they post – giving a massively different view of their lives to what is actually happening. I always find it crazy when people filter the f*ck out of a picture – when half of their ‘friends’ see them on the school run and know they don’t look like that!

Anyway – enough of me ranting about two faced / filtered posters – and back to the book!

The social media ‘branding’ is vital for Tori – it’s what her book sold, and what her public expect.  She can’t post that she’s doubting whether her chap really is ‘The One’ because that would bugger up brand Tori (similarities to Brand Beckham anyone?!). However her friends are settling down and popping out kids – and she’s not sure where she and ‘rock man’ are going to – and where either of then want to be.

It’s been said it’s a Bridget Jones for millenials – and I can see that it definitely has Bridget connotations – but Tori is very different.  Interestingly it’s whether she should escape a long term relationship rather than trying to find a man that is the crux of the storyline.

It is a really quick read – and you canter through it – wanting to find out what’s going to happen to Tori next.  A couple of times I wanted to give her a shake – or maybe a cuddle – and tell her that it will all be ok whatever happens.  It definitely made me appreciate yet again doing all of the school / university / first marriage / accountancy training contract (honestly, I wasn’t like a regular accountant #injoke)  / second marriage / first couple of kids – before social media was a thing. The additional pressure that must put on ‘the youth of today’ is horrific #oldfart.

I would suggest at mid 40s I’m slightly older than target market – but I really enjoyed the book (phew, I can still be friends with the donator!).  Unsurprisingly, given the blurb, the language is quite strong, and there’s an occasional (and that’s the point, only occasional) sex scene which is a bit eurgh – but it’s a vital part of the storyline.

Now I’ve lined this up for a category in my 2018 Reading Challenge, but due to an incident with a glass of prosecco and my computer, I can’t remember what it is – but it will be added once I’m operational again.

This would make a perfect, swift, holiday read – so I’d definitely recommend downloading / buying / borrowing from the library this summer.   I will also be looking at other books by Holly Bourne – and recommending the YA stuff to my 15 year old.

2 thoughts on “Book Review: How Do You Like Me Now? by Holly Bourne”