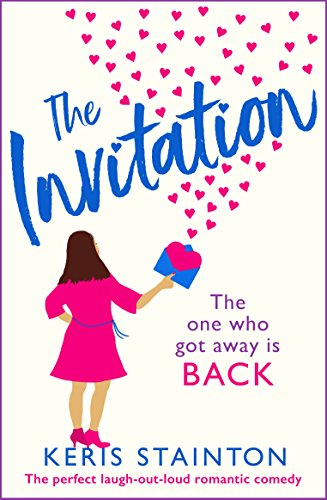 “When Piper James unexpectedly gets a message from her insanely hot teenage crush Rob Kingsford, inviting her to their school reunion, her heart flips. She hasn’t seen Rob in eight years – and he’s always been the one who got away.

Throw in some old friends (and frenemies), a sister on the edge of a meltdown and a few too many cosmos and you have all the ingredients for a real night to remember… Will Piper and Rob finally get together, the second time around?

A hilarious and uplifting story about conquering your demons and being true to who you are.”

I saw this on Netgalley and it looked just my bag – and needed after a particularly complicated, heavy read last time – so I downloaded a free advance review copy! #yaytofreebooks!!

I haven’t read anything by Keris Stainton before – but having seen her compared to Mhairi McFarlane – I had high hopes!

It was a lovely, easy read – and I liked Piper from the start.  The fact that she’s not stick thin is vital to the storyline in a number of ways – but it’s mentioned in passing rather than weight / size specific – which I really liked.  I also liked the body positive message that Piper gave out – that shaming her on social media for being overweight was unacceptable – but equally so was shaming others for being ‘too skinny’.  Nobody should be shamed for their size – whatever that might be. #getsoffsoapbox

Whilst the blurb talks about the relationship between Piper and Rob – it’s actually much more than that.  It deals with sibling relationships, relationships between male and female platonic friends, the effects of grief, relationships with older relatives – and feels much more nuanced than some straight rom coms.

I suspect I’m a bit older than target audience (and until there were some raunchier scenes I had thought would be a good book for my 14 year old, in fact she’d probably still think it was fine!!) but even this middle aged Mum of 4 enjoyed it.

I devoured it in a matter of hours, and would definitely read books by this author again.  I’ve noticed that it’s down as a 99p download on Kindle once it comes out in June – and it’s most definitely worth the price of half a cappuccino!